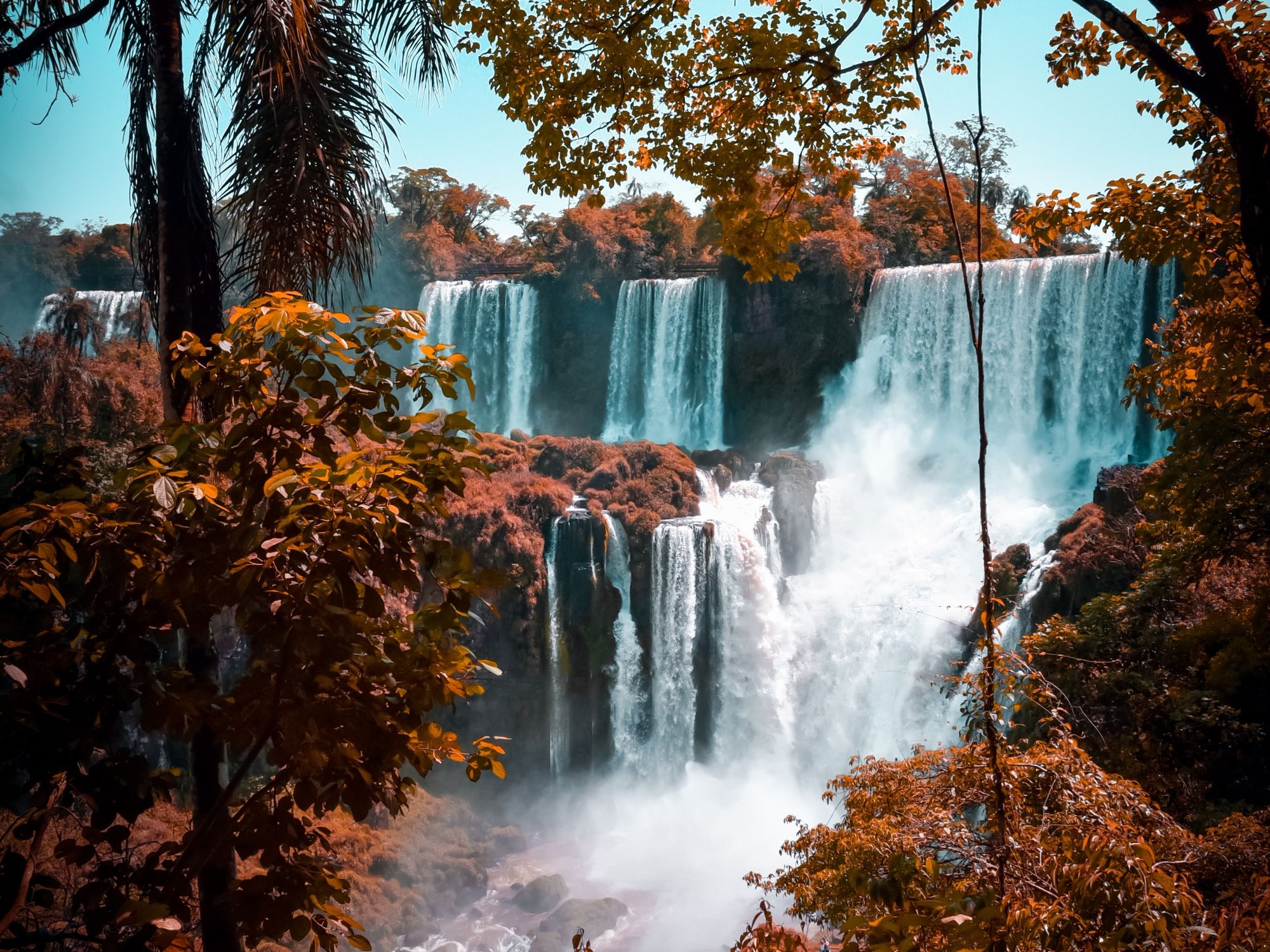 15 Of The World’s Most Beautiful Waterfalls

I think waterfalls are one of the planet’s most extraordinary beauties. The scene. The smell and sound of rain. The sensations — all of it is, I truly believe, unforgettable. The instinct to find and enjoy freshwater is human, so many people have waterfalls on their must-see list.

Not many people know where to go looking for them, though. If you haven't ever seen the magnificent cascades (or if you have and just need to see more), here are 15 of the most beautiful waterfalls in the world.

The world's largest waterfall location is nearly three kilometres of hundreds of waterfalls. On the border between Brazil and Argentina, it is a significant tourist attraction in both countries. No matter what side you're on, the view is powerful water gushing through the incredible foliage of a protected national park. Think up the most magical rainforest, and Iguazu Falls is better.

The Zambezi River runs between two African countries: Zimbabwe and Zambia. On the river is The Smoke That Thunders or Victoria Falls as it is popularly known. As one of the world’s most incredible phenomena, the waterfall is a UNESCO World Heritage Site. People usually go to the Zimbabwean side for the best view and the Zambian side for closer contact (like swimming in Devil’s pool).

Havasupai is a resident tribe just outside the Grand Canyon, a famous river valley in Arizona. The name of the tribe translates to ‘people of the blue-green waters’, and there are five waterfalls here pouring over beautiful cliffs of orange and green and into pristine pools, after which the people are named. Of all five falls, Havasu Falls is recognised as the most beautiful, therefore getting the most visitors.

This was popularly known as the world's highest waterfall, and some still argue this is true. Towering nearly a thousand metres above ground, Angel Falls comprises two cascades. The Churun River free falls until about 30 metres from the ground before the whitewater makes another drop. Be ready for the journey, which involves a small plane to Canaima and then a boat ride lasting an entire day.

Niagara Falls is pretty famous, as it has multiple viewpoints in both New York and Ontario. It is recognised as one of the world’s most powerful waterfalls. Like many other grand rapids, Niagara Falls comprises three cascades — the largest is named Horseshoe Falls. Visit Cave of the Winds (a tourist attraction itself) in New York for a truly unique view.

This is four tiers of impressive spray, and it is one of the tallest of India’s many waterfalls. More than a thousand feet tall and almost a hundred feet wide, the water plunges with force and speed. The phenomenon creates whitewater so powerful that Dudhsagar Falls earned the nickname Sea of Milk. The Mandovi River is the end of the downpour.

Deep in the Amazon is the rainforest country of Guyana, home to the world’s largest single-drop waterfall. Georgetown, the capital city of Guyana, has regular flights on small planes to this hidden gem because it’s a little difficult to reach. Even on the flight, the views are incredible; but you can also walk to the top of the falls, which is about 15 minutes away from the airstrip landing.

The combined downpour of 16 lakes in this park is a stunning view of the water and luscious plants. Plitvice Lakes National Park is a surreal beauty made up of every shade of green and blue, and the instagrammable colours of the water flow over limestone and chalk rocks. The waterfall is one of Croatia’s biggest tourist attractions.

This is one of the biggest tourist attractions of Cebu Island in the Philippines, mostly for the turquoise water the fall pours into. The insta-worthy clear pool is the highlight of the visit for most tourists that come here, and you can jump right in after taking all the pictures you want. Still, the downpour offers an enjoyable waterfall atmosphere.

Gullfoss translates to golden falls, a name tied to Icelandic legends. Travellers are in awe of the two cascades, but locals adore them and the distinguished history — from stories about Viking treasures to real legal battles in the 1900s. The Great Golden Waterfall is also the largest volume waterfall in Europe.

Tukad Cepung is a hidden gem sheltered by huge rocks. The sun, though, can shine through the canopy of leaves and branches, creating a scene straight out of a magical adventure movie or Pinterest nature board. While swimming in the pool around the fall, the sunlight against the pouring water can create rainbows that can look like they're coming right at you, too.

The enchanted forest backdrop makes a surreal site out of these popular tourist attractions. There are two cascades over the border between Vietnam and China — a waterfall on either side. Ban Gioc, a three-tiered flood on the right side of the border (the Vietnam side), is recognised as Asia’s largest waterfall.

New Zealand's Sound Island is home to Sutherland Falls, an impressive sight that you might recognise from the fantasy film: The Hobbit. The hiking path to the waterfall, even dubbed The Finest Walk In The World, certainly leaves an imprint in visitors’ minds. As one of the world’s largest waterfalls, the gushes inspire admiration and awe in those that stand before them.

From gorgeous blue waters that flow like milk to rays of light barely breaking through the dense vegetation above, Kuang Si is a picture-perfect, tranquil destination. This makes it a great destination for all kinds of visitors, whether you’re looking to adorn your Instagram feed or simply want to revel in the ethereal setting.

Home to the phenomenal attraction that is Yumbilla Falls, Northern Peru is visited by tourists from all over the world. The powerful stream comes from a cave named Caverna San Francisco and is easily seen pouring down four tiers. Hiking isn't the only engaging part of visiting here, as many visitors also enjoy wildlife watching.