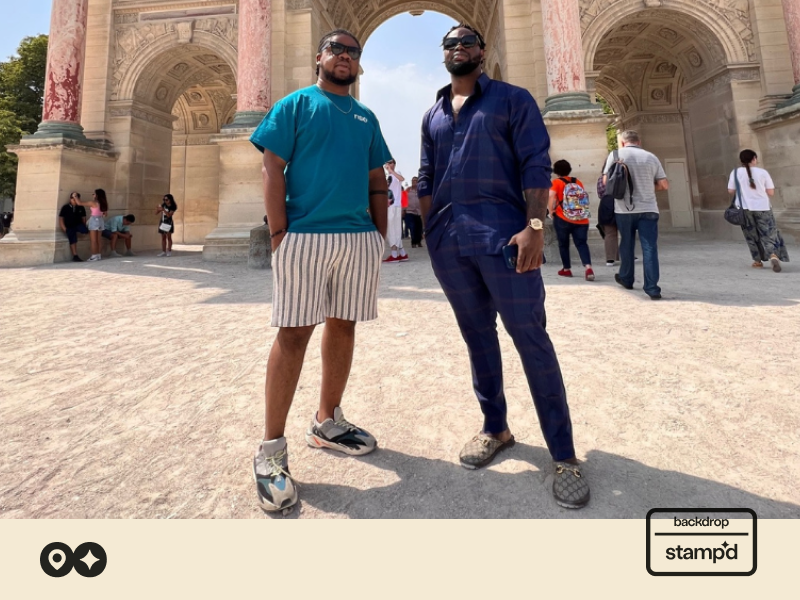 For this week’s Stamped, Eke Urum, founder of Risevest, walks us through his exciting journey across Europe. He tells us about all the beauty he took in, and his new-found appreciation for how laid-back and easy-going Europeans are.

This is his story as told to Chukwunonso Emelumadu, writer at Backdrop.

In the past, I’ve been to countries like Benin Republic, Ghana, Togo, England, Jamaica and Canada. My work also has me going to America from time to time. I decided to go on a European hop because I realised that apart from the UK, I hadn’t really explored Europe. I had been working a lot and had a loss in my family, so I decided I needed a break.

Since getting a visa into one country in the European Union allows you to enter the others, it made sense to maximise this break and visit multiple countries. My cousin had also been planning on exploring Europe, so I got my Italian visa and flew to Rome; my cousin joined me from America. We spent two weeks hopping around Europe, and it was awesome.

In Rome, we stayed at an Airbnb with really nice furniture and brilliant paintings — it was a stunning apartment. The day after we landed in Rome, we went to The Vatican and had a Vatican city tour. We saw the Sistine Chapel and Michelangelo’s famous painting of God and Adam’s fingers touching at the point of creation. It’s an amazing painting. We visited different palaces and museums within The Vatican; we also saw St. Peter’s Basilica, which is the largest church in Italy and the one the Pope presides over. It was a nice first day in Italy.

The next day, we visited the magnificent structure that is the Coliseum, walked around downtown Rome and saw the balcony where Mussolini used to give his famous speeches in the 1950s. It should be obvious that at this point, we were just being diligent tourists. This was the theme for the duration of our stay in Rome. We spent three days visiting iconic buildings, shopping and trying out local Italian food. We loved every minute of it.

After three days, we went to a city called Treviso to visit my sister and her family. Treviso is 40 minutes from Venice and famous for being the region where Proseccos are made. Treviso is full of wineries, and we visited a bunch of them. We stayed in Treviso for a couple of days, just catching up with my sister and having quality family time. I really enjoyed this part of the trip because, as adults, whenever you can step away from work and spend time with family is a blessing.

From Treviso, we took a train to Venice. Then we took a boat around the Island because why wouldn’t we get a boat in Venice? We also went through the inland waterways. When we got off the boat, we took a walk and explored the different sections of the city. We walked around different squares, bought some souvenirs and just admired the beautiful city. We left Italy the following day.

From Italy, we flew to Paris, where we stayed with a friend. We got to see the Eiffel tower in the daytime and at night. At night, the Eiffel tower lights up and glistens — it’s truly a beautiful sight to behold. We took a bus ride around the city which, to our surprise, was free. Then we went to The Louvre, the famous art museum and saw iconic paintings like The Mona Lisa. We also went to a Parisian club, where they were playing afrobeats and had a really chill time.

Next, we went to Berlin. We didn’t really do too much there. We were mostly there to see a friend, so we didn’t go to visit the iconic tourist spots. The most memorable thing we did in Berlin was eat Goulash, which is a traditional Hungarian dish, at a Hungarian restaurant. My friend’s girlfriend is Hungarian, so she introduced us to it, and I'm really glad she did because it was delicious. We also tried this gin made from passion fruits, which was also great. The restaurant convinced me that I would like to experience more of Hungarian culture.

The next stop on our European tour was Amsterdam. We took a 6-hour train ride from Germany the following day and passed some really beautiful places on the way. We had to use Google Translate on the train because all the menus were in Dutch/German. In Amsterdam, we stayed at a hotel called Cityden The Garden. There was an afrobeats festival in Rotterdam, an hour from Amsterdam, which we visited. We saw Mr Eazi and a couple of smaller artists. Wizkid was supposed to perform later, but we didn’t wait because it was too long and we didn’t have that much time.

That night, we met up with some of our Nigerian friends, went to eat and then visited the red light district. It’s an adult-themed district in Amsterdam that has gotten quite a reputation over the years. From prostitution to open marijuana consumption, anything goes there. We walked around the district and checked out the weed shops. We also visited the Van Gogh Museum and toured the rest of the city before we left Amsterdam.

After this, we went back to Italy, but we went to Milan this time. Here, we stayed close to the Duomo di Milano, which is a big Gothic cathedral, one of the largest in the world. The Airbnb we stayed at was within walking distance, so we would just walk around and sightsee. In many places around this area, cars were not allowed, so everyone walked. We bumped into people from literally every part of the world. People were speaking in different languages, and you could see the diversity from a mile away. This was how we spent our last day in Europe before we both travelled to the US.

One thing I loved about this trip was seeing firsthand how laid-back and easy-going Europeans are. It’s such a stark contrast to how things are in Lagos. It was weird at first, but I eventually found it quite refreshing. Another thing I love about Europe is how much attention there is to beauty, architecture and art. There are so many beautiful places and buildings in Europe, and not just in the major cities. That left a very strong impression on me.

This trip was much needed, and I loved every bit of it. I’m sure it won’t be too long until I return to Europe, and I would recommend a visit to everyone who hasn’t visited.