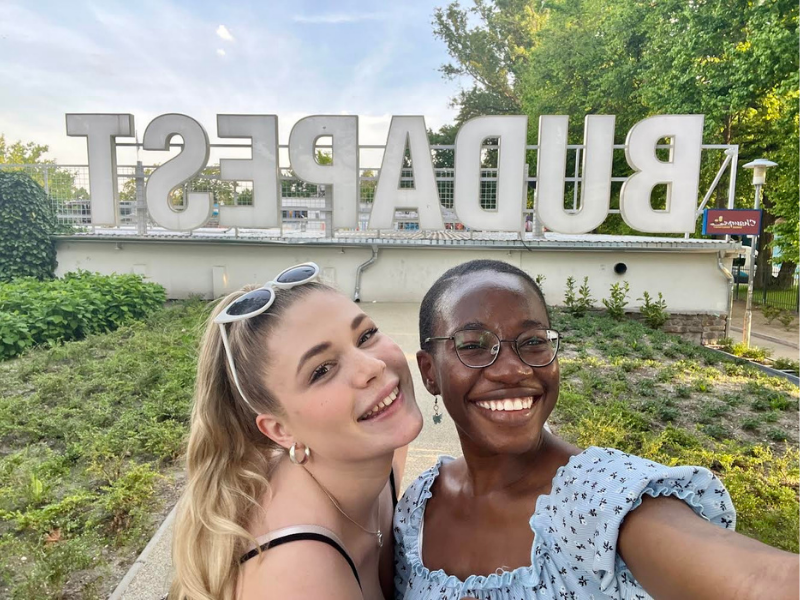 I take short trips around Europe from time to time. Sometimes I travel by myself and other times I travel with my partner or best friend. I either travel for leisure or to attend and speak at conferences. Some cities I’ve travelled to in the past include Porto, Warsaw and Bremen.

My trip to Budapest was one of my leisure trips, and the reason I went was because RyanAir, a budget airline, had five-pound sales and Budapest was the cheapest destination. I was able to get a return ticket to Budapest from the UK for 20 pounds, and that wasn’t an opportunity I was prepared to pass up. I spent only three days in Budapest, but I had an amazing time.

In Budapest, I stayed with a friend I made on the trip. So there’s this couch surfing thing on Facebook that’s just for female travellers. You can find women to host you in cities when you travel; it’s really fun, and it’s a great way to save money on accommodation. She could only host me for two nights, so I had to get a hotel on the last day.

So the evening I went to Budapest, I met my host, and it was a surreal experience. She’s Hungarian, but she has a lot of Nigerian friends, so when she heard I was coming, she asked if I wanted jollof rice. I’m sure you can imagine how surprised I was. A Hungarian making me jollof rice is not something I thought would ever happen to me, and the best part is that her jollof rice was so good, I asked for seconds.

After this, we started talking, and we really got along. That was a relief for me because I didn’t want things to be awkward in the house. It was so effortless and natural with her, like we’d known each other for a while. I even taught her how to drink garri, and it was so fun.

The next day, I met up with another girl from the same Facebook group who was visiting from Vienna, and we went around Budapest together, being the best tourists we could be. First, we went to the Fisherman’s Bastion, which is a really big and beautiful castle. It’s one of the most popular monuments in Budapest, so it was a tourist hotspot. We also went to Buda Castle, another magnificent and historic castle in Budapest.

Next, we went to the Metropolitan Ervin Szabó Library. This is a hidden treasure in Budapest; the architecture is truly amazing. It used to be a castle in the past, but it was transformed into a library. If you go to the fourth floor, you can still see all the original castle furnishing. The next stop on our tourist destination was the Hungarian parliament building, which reminded me of a Disney castle. There are so many beautiful castle-like buildings in Budapest.

In the evening, my host met up with us, and we went to Margaret Island, a really popular island in Budapest. They had this stunning water fountain show which was definitely one of the trip's highlights. The water fountain syncs to music, and it was so cool. We were literally just there watching the water and having an amazing time. Luckily, I found a couple of Nigerian restaurants in Budapest, so I ate at two of them. I love eating Nigerian food wherever I go.

The next day, I went to Budapest’s famous thermal baths. I went really early in the morning when it was cold, so I could really enjoy the effects. It was basically swimming, spas, saunas, all of that. This was also the day I was meant to leave my host, but I ended up leaving the house two hours later than I planned because of how engrossed we were in our conversation.

After I got to the hotel, I went to another Nigerian restaurant to have lunch, and then I met up with another person from the Facebook group. We went bar hopping because that’s how I like to finish my trips; I think it’s a great way to invest in the local community. After this, I went back to my hotel and flew back to England the next day.

I really loved the fact that I was able to do a lot in such a short span of time. My favourite part of the trip was meeting new people and making new friends; my host really made my trip what it was with her hospitality and brilliant recommendations. My other highlight was trying a Hungarian pastry called Kürtőskalács, a long hollow cylinder of bread dipped in cinnamon and sugar. It kind of reminded me a bit of Agege bread actually. It was so delicious.

My trip to Budapest was full of many pleasant and beautiful moments, but if I had to mention one that was unpleasant, it would be the fact that I was almost hit by a car twice. The reason for this is actually weird because if you’re on the pedestrian crossing and the traffic light changes, the cars just start moving. In other places, the cars wait for you to pass before they move, so that really surprised me. But other than that, my trip was amazing.

I loved my trip to Budapest, and I can’t wait to go on many more trips in Europe and around the world.

Plan your next adventure with Backdrop.
Download for iPhone
Stamped