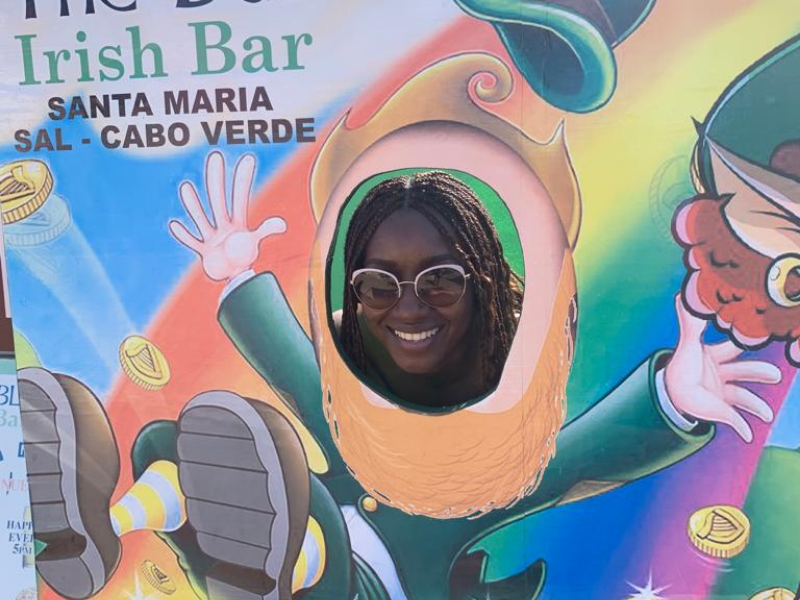 For this week’s Stamped, Ozzy Etomi walks us through her relaxing solo trip to Cape Verde. She talks about how that week-long getaway inspired her to take one solo trip a year, and why the tranquil Cape Verde is heaven for seafood lovers like herself.

This is her story as told to Daniel Orubo, Content Lead at Backdrop.

Before the pandemic, I used to travel three to four times a year. London and America are my go-to staples, but at some point I became really interested in exploring cities in Africa. I visited Dakar, Kigali, Nyungwe Forest, Johannesburg, Capetown, Nairobi, Malindi, Accra, Benin and Zanzibar; they were all incredible.

Now, post-pandemic, I’m trying to get back into the groove of travelling without all the stress of COVID forms and tests. I’ve been able to travel twice this year already, which is great.

While I’ve always enjoyed travelling with groups of people — not just friends but family too — I also try to have at least one solo trip a year; it’s something I recently started doing. I was inspired by my trip to Cape Verde in 2019, my first solo trip, two years after I had my son.

I hadn’t had any alone time since having him, even on a plane; I always travelled with him. So when a direct flight from Nigeria to Cape Verde opened up, and they were having a bunch of promotions, I thought, “Why not?” After a conversation with a friend, I bought a ticket to Sal, an island in Cape Verde, and booked a really nice beach house on Airbnb. She ended up flaking, so my girls trip turned into a solo trip.

I’ve always preferred Airbnbs to hotels, especially ones that are really interesting and well-designed. As I became a mum, an Airbnb, which comes with a kitchen and a washing machine, became even more convenient. Now that my son’s older though, I’ve been gravitating towards hotels; aside from all the crazy Airbnb stories, it’s really nice to have people clean up after you, especially when you’re on holiday. Plus room service, am I right? That being said, I loved the Airbnb I stayed at in Cape Verde. The owner was really friendly; he gave me a list of things to do and places to see.

My trip lasted for about a week, and I went to the beach every single day. I also did a lot of walking and exploring — checked out the strip, and stopped by a few bars and markets. Sal is a sleepy beach town, so the energy was very relaxing and authentic. I went on boat rides, sat by the sea and even listened to locals tell amazing stories.

And as a lover of seafood, I was basically in heaven. Every day, I got to wake up and eat fresh fish and lobster. I don’t think I ate chicken or meat once throughout my stay. I also met this guy named Carlos, a retired Italian cook who used to live in Nigeria. Every morning, he goes fishing and sets out whatever he catches — lobster, prawn, calamari, mussels — in a fish tank. You go to his restaurant, Creparia Sol-doce, point at what you want and he grills it fresh for you. I had lunch there every day, and it was consistently delicious.

I visited a bunch of other nice places, too, like Barracuda, a beach side restaurant; Piscador, a restaurant with a live band; and Buddy Bar, which I especially loved because anyone could connect their phone to the laptop and play whatever they wanted. So, of course, I went up there and started playing Beyoncé for them.

I also brought a bunch of books with me, so I did a lot of reading by the pool. I remember my friends trying to get me to go ATV riding, but I turned them down. The trip was purely for chilling; I wasn’t interested in any strenuous activities. To be fair, I rarely travel for those kinds of experiences anyway.

I didn’t really have any expectations for this trip, but it was surprisingly tranquil. It didn’t feel like it had been touched too much by tourism; it still felt local enough. Unlike Zanzibar, for example, with ultra-modern beach resorts that feel curated for white people (while the locals live in squalor), that wasn’t the case here. The people were very friendly, the food was fresh and delicious and the weather was great.

Funny story: when I first arrived, because of the language barrier, my taxi couldn’t find my Airbnb and ended up dropping me and my friends off at the wrong location. I walk in, wheeling my suitcases, and it turns out it was the Prime Minister's house. It was mortifying because I imagine they were like, ‘What the fuck?’ but they were so friendly and his kids ended up walking me to my Airbnb. Imagine if that was Lagos; some policeman would have probably arrested me.

All in all, It was a very peaceful trip, and that was exactly what I needed. I felt really good after. I had been so overwhelmed, so it was nice to have everything slow down for a bit. Alone time definitely does wonders for my mental health and this trip made me remember how, despite being a very social person, I really enjoy me-time. I’m also glad I went when I did because that airline no longer flies from Nigeria to Cape Verde. For my next solo trips, I’d like to visit Lou Moon in Ghana and Cote D'ivoire. I’d also like to visit Japan, but that doesn’t need to be a solo trip.

Plan your next adventure with Backdrop.
Download for iPhone
Stamped