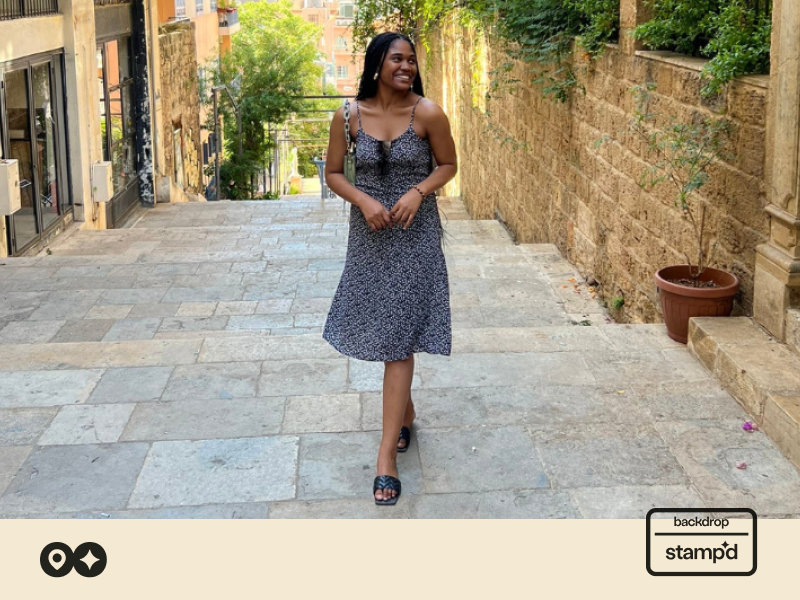 I Got To Explore Lebanon Through The Eyes Of A Local

For this week’s Stamped, Alma Asinobi, a travel content creator and content strategist, takes us through her week-long trip to Lebanon. She tells us about how she got to enjoy the trip from the point of view of a local, a Lebanese friend who showed her the ropes

I decided to travel to Lebanon because I had been to Jordan at the start of the year and really enjoyed the trip, so I thought it would be a good idea to explore more of the middle east. I have a Lebanese friend who said he was going home for a while, so I figured that would be the perfect time to visit. I mean, it couldn’t hurt to have a local to guide me.

So I took a night flight from Nigeria to Lebanon and arrived early in the morning at around 5 AM. I had some immigration issues, both in Nigeria and Lebanon. Lebanon happens to be on Nigeria’s red list, so I had to undergo very thorough searches at the airport. When I landed in Lebanon nine hours later, I had to undergo some more questioning. I also had a hard time getting a visa there because the person meant to issue it wasn’t around. I had to wait for about two hours in the airport before I could leave and enter Lebanon’s capital, Beirut.

My friend came to pick me up from the airport and took me to his friend's house because it didn’t make a lot of sense to book a hotel when I would only stay there for a couple of hours. I actually liked it because it allowed me to meet more people and make more friends in Lebanon. This was a nice switch from what I usually experience when I travel alone and have no friends in the country. The house was full, and his friends made me feel very welcome. The first thing I did was sleep for six hours because I was tired. I woke up by 1 PM, and then my friend and I set out to explore Beirut.

We walked around and went to Bourj Hammoud, a town in Beirut. We saw some really cute coffee shops, and we saw the ruins of the 2020 Beirut explosion, which they were trying to rebuild. We visited the Beirut sign and drove all the way up to the mountains to watch the sunset. After this, we went to try Lebanese shawarma at this popular place called Mano. He got the beef shawarma, and I got the chicken; it was so good. We then returned to the house, and I did some work. This was an amazing first day for me in Lebanon and a wonderful introduction to the country.

The next day, we left Beirut. We took a two-and-a-half-hour trip to a city called Tyre, but we first made a stop at Sidon. We visited the remains of the Sidon Sea Castle and explored what once was. We didn’t spend a long time there, so I didn’t learn a lot about the castle’s history, but I wish I did. We also walked through the souks, visited a spa, and my friend took me to a place he used to go to when he was younger to try falafels — it reminded me of akara. After this stop, we went to Tyre. I checked into a really nice boutique hotel and spent the night there.

The next day, my friend came to pick me up from the hotel. We drove along the coast to Jezzine, his hometown and where his family house is. Jezzine is a beautiful city surrounded by mountains. We took a long drive from Tyre to Jezzine, and we passed through the largest pine forest in the middle east. Since we were around mountains, the views on this trip were magnificent, and the air was refreshing. I personally like being in and around nature, so I liked every part of this trip. We even took the longer route on purpose before we finally reached his family house.

There, I got to meet his parents and siblings. His mum was excited to see me, and that made me really happy. She loved my dress, and even though she only spoke Arabic, she was able to communicate how happy she was that I was there. She had made so much food in anticipation of us getting to the house. It was an amazing experience. Then something hilarious happened: I went to change to get ready for dinner, and when she saw me, she was visibly perplexed because she was wondering where my beautiful dress had gone. Apparently, she had gone to find an outfit that was the same colour so that we could take a picture of us matching. I quickly went back upstairs to change so we could take pictures for her Facebook page. It was a great night, and I ate so many things that were foreign to my taste buds. It was really nice spending time with a Lebanese family. The whole night felt so special and authentic.

The next day, we took a five-hour drive from Jezzine to Batroun. His friends had a beach house they had rented for a month, so we wanted to go there and enjoy the scenery. On our way there, we stopped at the Al Shouf Cedar Reserve, which is popular for the famous Lebanese cedar trees. I met a lot of nice people there, both workers and visitors. It was a hiking trail, but I believe I’ve done enough hiking to last me a lifetime, so I don’t do it anymore. I just sat down and enjoyed nature. After that, we stopped at a really beautiful restaurant called Ain Qeni. It’s a natural restaurant that’s right at the intersection of a rock and a mini lake. We also stopped at this winery called Ksara, where we took a tour and bought some wine to take to the beach house.

When we got to Batroun, I couldn’t stay at the beach house with everyone because I was socially anxious. They were all friends and were speaking Arabic, so I felt like a stranger. This was all a bit much for me because my social battery had run out after the long trip. I just wanted to do a bit of work and go to bed, so I got a guest house around the area and spent the night there. The next day, I went back to the beach house to socialise because this was my last day in Lebanon. From there, I got a cab and went to Jeita Grotto, a really beautiful tourist attraction. I personally believe this place should be one of the wonders of the world — that’s how remarkable it is. I later returned to the beach house, got my stuff and went to the airport. I did some shopping until it was time to board my flight back to Nigeria.

The most surprising part about my trip to Lebanon was that people dressed like they do in the west. I had brought some long dresses for the trip so I could respect Islamic culture, but apparently that isn’t a thing in Lebanon, and people dress however they like. It also shocked me that there were so many churches in Lebanon, more than mosques even.

The thing I loved most about my trip to Lebanon was the comfort I got from being with my friend. With him being a local, I got to have an immersive experience where I didn’t really feel like a tourist. This made my experience ten times better, and I’m so glad he was there.