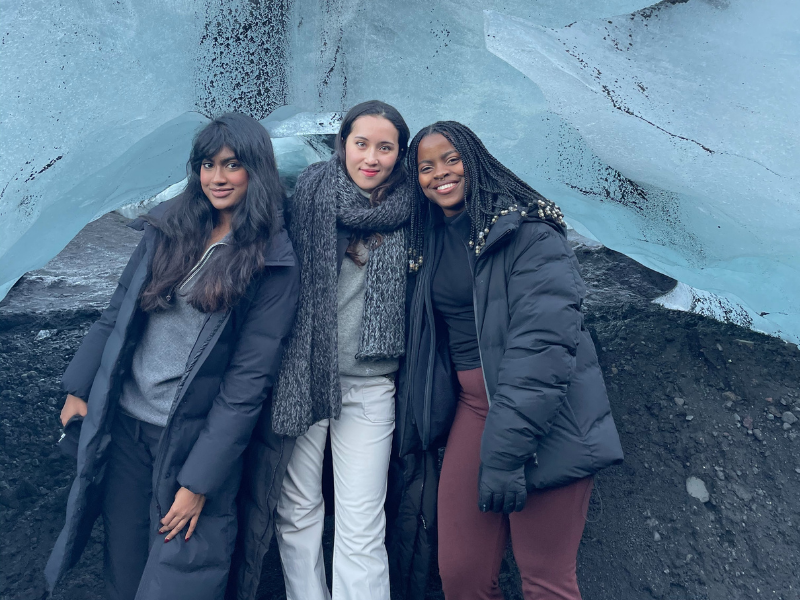 I Fell In Love With Iceland With My Best Friends

For this week’s Stamped, Omasirichukwu Nwibe, a 21-year-old Nigerian schooling in England, tells us about her trip to Iceland with two of her closest friends. She talks about being apprehensive at first but eventually falling in love with the Nordic nation.

This is her story, as told to Chukwunonso Emelumadu, writer at Backdrop.

I’ve travelled quite a bit in the 21 years I've been alive. I've taken most of these trips with my family, but I recently started taking “grown-up” trips by myself and with friends. Some of the places I've visited in the past include the Netherlands, Norway, Croatia, USA and Dubai.

Early last year, two of my best friends and I were thinking of a suitable friendcation destination for the winter break. We all attend St. George’s University of London and wanted to have an excellent time before school started up again in January. We discussed it, considered our options and it became evident that they both wanted to go to Iceland.

I wasn’t too keen on the idea because it was winter, and they wanted me to follow them somewhere that’s notoriously cold; it just didn’t seem like my scene.As you can tell from the headline, they were able to convince me.

One of the main reasons I agreed to go was because they told me that, in the future, the Northern Lights will become less visible and might disappear completely. After doing my research, I knew I had to see this beautiful natural phenomenon while I still could, and Iceland is one of the best places in the world to see it.

We went to Reykjavik, which is the capital city of Iceland. We split an Airbnb, as it was more affordable than staying in a hotel. I need to mention that Iceland is an expensive place to visit compared to other European countries, so we didn’t see many restaurants during our stay. We mainly ate at local spots in downtown Reykjavik. Our favourite spot was called Cafe Loki, where we had traditional Icelandic soup; it was so good.

However, we couldn’t be on a trip and not go to a fancy restaurant at least once, so we visited Apotek for dinner. It’s a lovely place and the food there is very good. The only downside was the cost, but sometimes you need to remember that you only live once.

Our trip to Iceland was full of fun activities. We went to Blue Lagoon, a hot body of water in the middle of the cold, so you can only imagine how happy we were to swim there. There’s a spa there, so we were able to give ourselves a treat — mud baths, saunas and more. It was my favourite part of the entire trip.

We went on lots of tours in Iceland. On one occasion, we went on an expedition to the south coast, and we went to one of the black sand beaches. We had a lovely time playing in the sand and expressing our inner children. We went to see glaciers and waterfalls on a different tour.

Everything is so quiet and peaceful in Iceland, even in the capital city. At some point, we even went to a tomato farm. We were really trying to experience all parts of Iceland on our trip, and we spoke to some farmers that spoke English there. Everyone was so nice, friendly and willing to help.

Our trip was coming to an end, and it was now time for us to go and see the northern lights. The lights can only be seen when it’s dark out and from certain places in the city. So we had to go to a large mountainous mass of land on the city's outskirts, a place called Kjósarhreppur. We went there at night, and it was so beautiful; I could understand the hype once I saw it.

We really enjoyed the trip to Iceland. It's a very safe place, and we were able to have drunk walks past midnight, a privilege that we don’t have as women in London. We bonded more and I felt our friendship grow stronger after the trip. If you’re looking for somewhere different to go on your next trip, I would strongly suggest Iceland. It’s a wonderful place to visit with so many fun things to do. Again, I must mention that it’s really cold, so if those conditions aren't something your body can take, you should steer clear.

I’m already looking forward to my next trip even though I'm not sure where I'm going next. But who knows? It might be Denmark since I've already started my Scandinavian tour.