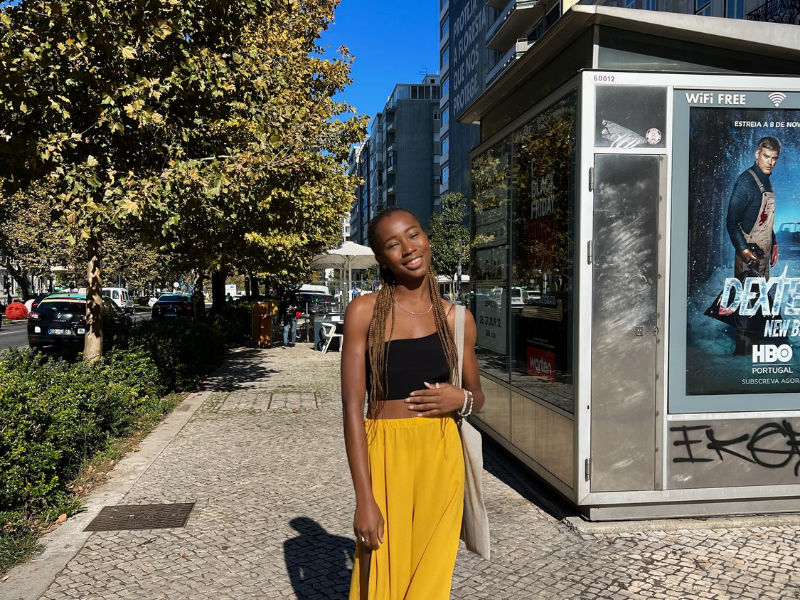 I Faced My Fears And Took A Solo Trip To Lisbon

For this week’s Stamped, Antoinette Okonkwo, a 20-year-old Nigerian schooling in Sheffield, takes us through her three-day solo trip to Lisbon. She talks about how her trip began with disappointment and how it was all worthwhile in the end.

I’m a medical student at the University of Sheffield. I love medicine, but sometimes schoolwork can be a lot, and I need to step away for a bit. I’ve found that travel is the best stress-reliever, and as such, I’ve become a bit of a travel enthusiast. My friends even tease me about being on a world tour.

I grew up in an upper-middle-class home, so I was privileged to travel a lot when I was younger, and I guess I got a taste for it. Paris, New York, London and Dubai are just some of the places I’ve been to with my family.

Lisbon is the first solo trip I’ve ever been on, but it wasn’t initially meant to be a solo trip. One of my closest friends and I planned to go to Lisbon for a couple of weeks, but our schedules never seemed to align. Eventually, we found a time suitable for both of us, or so we thought.

The night before we were meant to head to Lisbon, she had to cancel because she fell ill. I was there on my bed trying to decide whether to go alone, a thought which absolutely terrified me, or cancel it. I called my mum and told her about it, and she advised me to go regardless; she assured me that it’s possible to have fun by myself in a foreign city, and I’m so glad I took her advice.

On the day of my flight, I got up early because I booked the first flight to Lisbon — I wanted to spend as much time there as possible. I was still a bit anxious about flying alone, but I was also really excited about what the journey had in store for me.

I landed in Lisbon at 10 AM, and I headed to the Exe Saldanha, the cute hotel I was staying at. I chose the hotel because it was pretty central, so it allowed me to save money on transportation. Immediately I unpacked and settled in, I headed out because there was no time to waste.

Along with being a travel enthusiast, I’m also a food enthusiast. When I left the hotel, the first thing I did was take a food and wine tour; it was basically me walking around, entering different spots and trying out their food and drinks. I then went to have dinner at a spot some locals suggested. The food was really good, and I even met a Nigerian couple who were also visiting from the UK. We ended up spending like three hours after dinner messing around with a scooter on the streets of Lisbon.

On my second day, I decided to take a morning walk and take in Lisbon's beautiful scenery. After my walk, I went to get breakfast at A Padaria Portuguesa, which is renowned for its pastries, and it did not disappoint.

For my last day in Lisbon, I was determined to make it count. I went on a sunrise boat tour by 10 AM, where I met a girl who was also visiting from the UK. We ended up spending the whole tour together, and we even went for lunch afterwards; I really enjoyed her company.

Then I went on an hour-long segway tour around the city (it’s like a regular tour except you’re riding a segway instead of walking). In the evening, I went to a popular music show called Fado. It was really amazing and was one of the highlights of my trip; the experience was magical, and I would recommend it to anyone visiting Lisbon.

Since it was my last night in the city, I took a walk around so I could see the locals one last time. I got food at a local spot, went back to my hotel and boarded my flight back to London the next morning.

Lisbon is definitely one of the best places I’ve ever been to, and I’ll certainly be coming back in the not-too-distant future. I love how cultural the city is; the food in Lisbon is so unique and delicious. I am especially happy about the friends I made on the trip; I still talk to them today.

Even though fewer people spoke English than I expected, Google translate had me covered. If you’re unsure about your next travel destination, you should give Lisbon a try. The city won’t disappoint you.