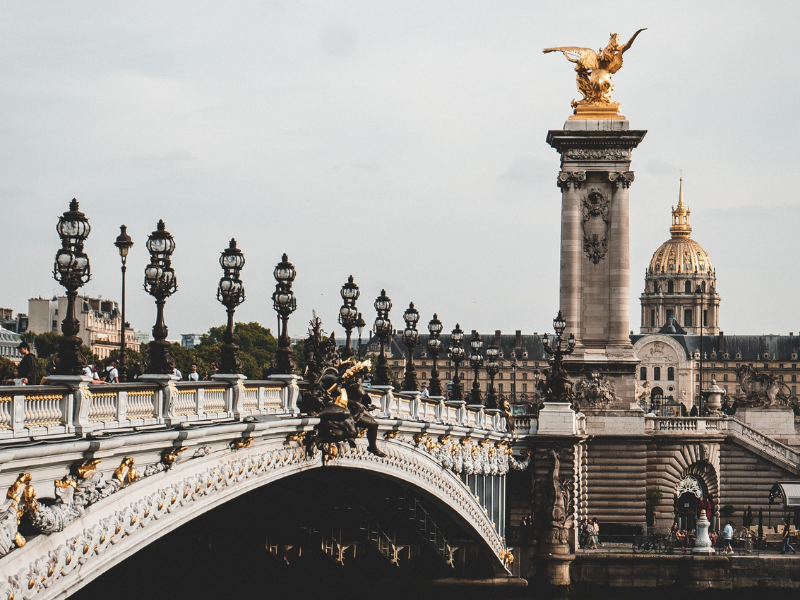 20 Of The Most Beautiful Places To Visit In Paris

French cuisine with some wine and French speakers within earshot are pretty essential parts of the Paris experience, yes, but the experience isn’t really complete until you take in the City of Light with your eyes, too. You have to go out, be stunned and take a ton of pictures. Today, I want to let you know Paris has beauty for all, no matter what your aesthetic preferences are.

To prove it to you, I’ve compiled a list of 20 extremely beautiful places in Paris for you to visit.

The Latin Quarter of the city is a haven of greenery that's very peaceful, compared to the rest of the city. Here, you’ll find Jardin du Luxembourg, a garden created by the order of Catherine de Medici to complement the Luxembourg Palace in the 17th century. Fondly called ‘Luco’ by Parisians, the area is open to the public throughout the year. To see the garden at its best, you should go in spring when the greens are at their greenest.

The Paris Panthéon was built in the 18th century, also in the Latin Quarter. The monument is modelled after the popular Pantheon in Rome, though the king at the time wanted it to be a church. It was to be dedicated to Paris’ patron saint, Saint Genevieve, and the building would house his relics. While the history of it all is important, you don't need to know too much to go enjoy yourself at the Panthéon. When you get there, just look up! No, really. For most people, the experience of this Mausoleum type architectural sensation is truly complete when they look up.

Taking a walk down this street with the right person (or even alone) is quite the colourful experience. The little street is very popular for being one of the most picturesque backdrops in the world. That’s why the quaint path in the 12th arrondissement calls creators of visual content from all over the world. Little tip for when you get there: you might want to check every now and then that you're not caught on camera when you're not exactly prepared to be.

Some people who visit this Gothic Chapel on Ile de la Cité say none of the incredible pictures can prepare you for what it's like to behold its 50-foot stained glass windows with your own eyes. I’m grateful for reviews like this. If not for them, I’d do something  stupid like leave my glasses in my room because I don't like how nose masks make the lenses foggy. Now, I know to just wear contact lenses instead.

The best things require the most effort, so remembering to take your visual aid won't be the most tasking thing about your visit here — unless going up a narrow spiral staircase to get to the upper chapel is more appealing than putting in contacts or foggy glasses. But then, Sainte-Chapelle has been recognised as a monumental beauty for up to eight centuries. I think it's worth the work, don't you?

This opera house is one of the best representations of classical luxury. It's named after the architect, Charles Garnier, who built the Italian style monument in 1875. Palais Garnier is a grand mix of an auditorium, museum library and some rehearsal studios and workshops. There are also public areas where people can stay to take the building in.

It’s pronounced Shoohnz-Eh-lee-zeh, and it’s as enchanting as it sounds to lovers of the French language. Champs Elysées is called the most beautiful avenue in Paris, but its own beauty isn’t the only reason it's such a tourist hotspot. It connects Arc de Triomphe with Place de la Concorde (both very famous structures in Paris). The Avenue is also popular among sports enthusiasts because the Tour de France’s last stage was at the avenue. These factors — and more, of course — make Champs Elysées one of the world's most famous commercial streets.

Arc de Triomphe (French for Arc of Triumph) is a monument built to honour French soldiers in the French Revolutionary and Napoleonic Wars. The view of the arc is magnificent, but what really takes your breath away is the view of the city from the arc. Place de la Concorde, the largest square in the French capital, is right on the other end of the street.

Nearness to Palais de Tokyo admittedly influences the number of visits to Place du Trocadéro, but this place can really affect your view of things, though it is — technically — just a grand open space. The space is elevated, so it looks like you’re standing right before all of Paris (including the Eiffel Tower). Here, you get a taste of what it’s like to be free and have the world at your feet.

This deck arch bridge goes over a river called The Seine and connects two quarters: the quarter of Champs-Élysées and the quarter of the Eiffel Tower. I think I’ll call it The Bridge of Beauty because Pont Alexandre III is not just beautiful on its own; you can also cross from one side of beauty to the other.

This is a place in Paris that I’ve been attached to since I was a child, thanks to my love for The Hunchback of Notré Dame — a movie I watched an unhealthy number of times. Then I read the book. Then I decided Quasimodo’s home would always have a place in my heart.

The cathedral’s name translates to “Our Lady of Paris,” and it was completed in the 14th century. Notre Dame is especially picturesque in cherry blossom season, and it’s reported to reopen in 2024, five years after there was a fire at the cathedral. Till then, I find satisfaction in the fact it's just as beautiful on the outside as it is on the inside.

We talked about being on top of Pont Alexandre III — hold on, I need to stop snickering — and going in either direction, but what happens if we go under? The deck arch bridge goes over the famous river Seine, which is a must-see for when I take that baecation to Paris. The idea of floating down the river in one of Seine's romantic boats called “Bateaux mouches” just appeals to my not-so-inner romantic.

It’s big enough to get lost in! Chateau de Versailles was built for Louis XIV, and it’s truly befitting  a king. A train ride will take you from Paris Austerlitz station to the Palace of Versailles, and even those 45 minutes make for a great experience.

Montmartre is a hill with quaint beauty, and it's very charming. It’s popular for its artistic history, giving its name to the district around it. Montmartre is such a tourist destination, that there's the Le Petit Train de Montmartre — a vehicle that goes around the area showing off its beauty.

In the 19th century, all sorts of artists and existentialists would meet at the 6th arrondissement of Paris. These rendezvous were pretty regular for a while; as in, they went on for about a century kind of ‘a while’. Now, St-Germain-des-Prés is a very popular shopping area in the city where you can buy almost anything.

Would any list of Paris destinations be complete without this world-famous tower? The Eiffel Tower is very popular for looking like a work of art, but you can also get in (on?) this iron monument to truly appreciate the art and its history. The view of the city from the top is so breathtaking, it's occasionally used for very grand events.

‘Basilica’ is a title given to a church that grants it privileges, particularly a right to reserve its high altar for the pope and international status. Sacré-Cœur is one of such special churches with privileges. The name, ‘Sacré-Cœur Basilica’ means ‘Basilica of the Sacred Heart of Paris’. The architectural work of art is also respected in Catholicism because of its contributions to theology.

It is amazing how green this place is; it just makes me swoon. Parc des Buttes-Chaumont is one of the biggest and most verdant spaces in the city. Because it was built over quarries, it’s high, then it's low, then it's high…You get the drift. A bird’s eye view, caves, waterfalls; it sounds like a natural paradise.

At the Musée de l’Orangerie, impressionist and post-impressionist art are put on display. The art gallery’s most famous exhibit is eight big murals of Claude Monet’s Water Lilies, which depict the impressionist’s garden at his home Giverny. There are other incredible paintings at Musée De l’Orangerie, all from the 19th century.

This museum is another great place to find incredible works of art in Paris. The Louvre Museum was a palace until August 1793, now it’s the largest museum in the world! Its once-royal-garden-now-public-park is great for relaxing after your tour of the museum.

The Galeries Lafayette is a famous store chain for luxury items. The chain has stores all over the world now, but the initial grand store is in the 9th arrondissement of Paris. The building's structure is a proper representation of how much luxury you’ll find in there.

Butte-aux-Cailles translates to ‘Quail Hill’, and it’s very fitting for this hilltop neighbourhood of Paris. However, that's not how the area got its name. In 1543, a man named Pierre Caille bought a vineyard here. He became the area’s landowner, and it was named after him. I think it's a really cute story, and not because my inner alcoholic is aroused by a vineyard — pfft. Now, the area is trendy, filled with wonderful village-style backdrops.

Random, but did you know Rihanna’s in love with Paris too? I mean, one time, she was looking at apartments and people swore she was moving. I definitely love Paris; this list reminded me that I do. See? That's at least two people who love Paris. And, you know, both of us have incredible taste. With so many extraordinary sights, asking what we love about the city is very… don’t. In fact, the important question is which of these places is your new must-visit destination?

Plan your next adventure with Backdrop.
Download for iPhone
LocationsTravelParis