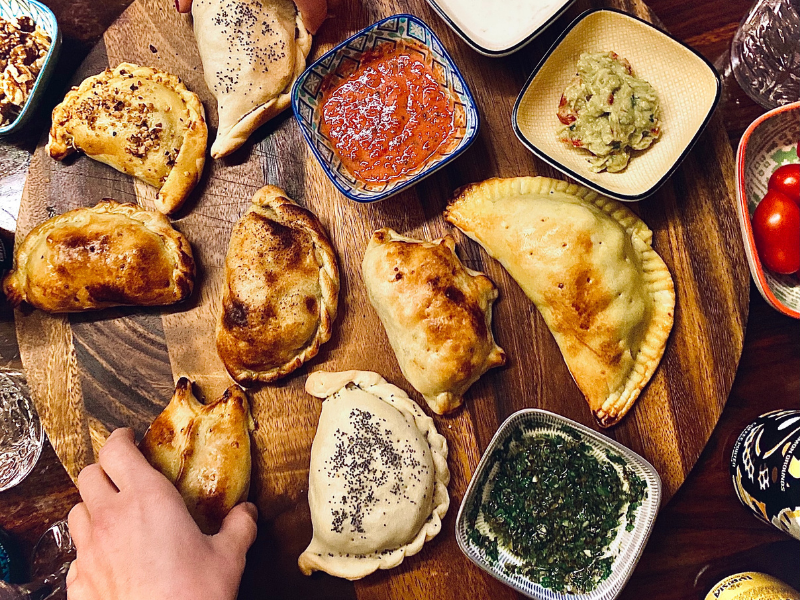 15 Of The World’s Best Food Destinations

The world’s cuisines are as dynamic as the cultures they originate from, so there's magic waiting for your taste buds all over the globe. Some cities offer traditional culinary delights, while others have many restaurants with travelled chefs who have picked up skills from the many countries they’ve visited. Some offer both. Whatever their forte, here are 15 of the best foodie destinations:

Italy is at the top of every true foodie’s must-visit list for wine and cuisine. There are all sorts of magical experiences awaiting your palate all over the country, and Tuscany happens to be one of the best regions to go for the best of Italian cuisine. The food is primarily traditional and has simple origins. (It’s inspired by peasant food.) However, there's nothing simple about the fantastic taste. Panzanella, Potato Tortelli, Castagnaccio, and of course, Pizza are a few of the top servings.

San Sebastian Cheesecake is one of the world’s most famous confections, but not just because it's easy to make. The historic Basque cheesecake is creamy caramel goodness; incredibly, it’s just one of the many unique reasons Donostia (the local Basque name for San Sebastian) is dubbed The Food Capital of The Planet. The city has more Michelin stars per square metre than every other city except Kyoto, Japan. Grabbing seafood, tapas, and even visiting the food markets are some of the best ways to explore this food-rich destination.

Most of this city’s delicacies are street food, but none is ever unsatisfying. You think you like the Mexican food from that Mexican restaurant? Wait till you try a plate made for you by a local. Their cookery involves nimble stuffing, filling, wrapping, topping and much more than some can only dream of mastering. Tacos would be a perfect start, especially if you’ve had one made by a non-Mexican. Then get into some tamales, quesadillas, gorditas, mole and more.

As a destination with as many Michelin stars as San Sebastian, it's easy to understand why Tokyo made the cut. Food tours in this city are a gourmet experience of seafood, street food and the setting of the beautiful city. When you're not at one of the incredible restaurants, join one of the culture walk tours or many other group tours of Tsukiji Fish Market and the city’s other popular food spots.

In 2010, UNESCO declared French food culture an intangible cultural heritage. One of Paris’ most incredible gifts is gastronomic delight. As the city is the romantic capital of the world, I find this quite respectable. Food is definitely a way to some hearts (mine, for example). Croissants are world-famous cheap pastries, and in their origin country, they can be even more affordable and more delicious. Other foods you can try include escargots, macarons and jambon-beurre.

The city of oaks is a quaint experience through the eyes and taste buds, too. Popular for its wineries, this region of South Africa has impressive cellars filled with chardonnays that taste like bottled up stars. There are lots of dining choices in Stellenbosch, from cosy farm kitchens with traditional aesthetics to modern minimalist restaurants. South African heritage food is hefty on fresh ingredients, so this happens to be one of the healthiest food trips you can make.

Since New York City is known for its incredible pace, many of its significant delicacies are, appropriately, fast food. Because this city has a century’s worth of acquiring culinary skills from various immigrants, there isn't any one type of food or food tradition; it’s flavour variety at its best! In the city that doesn't sleep, you can eat whatever, whenever. Typical fast food (pizza, hotdogs, burgers and more) are the apparent must-haves, but pastrami sandwiches, brunch and Asian food are great ways to spice up the experience.

Bangkok is such an ethereal destination; even, even the street food here is wholesome. There are both vegetarian and non-vegetarian delicacies, but you can see greens in almost every dish. The vibrant food culture involves using the best seasonings and other rich-tasting ingredients like basil, garlic and chilli. Seafood and noodle varieties (really, glass noodles, boat noodles, stew beef noodles, etc) are abundant.

Istanbul is another street food haven, but the breakfasts and traditional meals are even more divine. Coffee lovers might have to make sure to point out their preference, though. If not, you get a serving of tea with your breakfast, as is Turkish culture. It’s also Turkish culture that breakfast is always served with cucumbers or sliced tomatoes (sometimes both). Menemen is an incredibly affordable must-have with an addictive taste.

Tortitas, tomatican, and humita are some of the most popular dishes in this Latin American hotspot. Mendoza is also known for excellent wine because of the delicious grapes from the suitably dry and sunny region. Many of the local’s best servings involve bread, meat and veggie mixes. There are also delicious pastries like Medialuna — which goes well with coffee, making it a popular breakfast option.

Breakfast may or may not be the most important meal of the day, but when you have it British style, you’ll never want to skip it again. I particularly like all the proteins like the sausages and eggs, and it turns out that meat is also a big part of their dinners as well. After a full English breakfast in the morning, grab some fish and chips with a beer the next time you're hungry or a roast dinner if it’s Sunday.

Melbourne’s cuisine is exotic in more ways than one, as many dishes are notable adaptations from other cultures. Also, there are classics like meat pies, then more contemporary scenes and a notable coffee shop culture. Salt and pepper calamari of Cantonese origins and Italian chicken parma are sumptuous Aussie delicacies to try.

Divine aromas waft through the air in many corners around this city, but not every foodie will be able to try it all. Unconventional servings like takoyaki and odoritako (both of which are servings of fried octopus dough balls) or a simple cup of tea can both be magical experiences here. While the many Michelin restaurants in Kyoto make the city more famous among food lovers, Dontobori is also a delight if you prefer street food.

Lima’s street food (and Peruvian cuisine in general) is famous for savouriness. The blend of rich spices, seasonings and ingredients in the food makes for striking culinary prestige. Most dishes contain meat, rice, chilli, onions and other vegetables. Dishes like ceviche and lomo saltado are great starter choices before getting into the more daring stuff.

You can find Arabic coffee, delicious pastries, and even camel burgers in most cafes all over Dubai. Camel milk and camel milk ice cream have increased nutritional value compared to cow’s milk, so they're also popular food choices. The cocktail scene has recently gotten livelier, too, and you can treat yourself to Ruya’s twists of classic Turkish flavours.