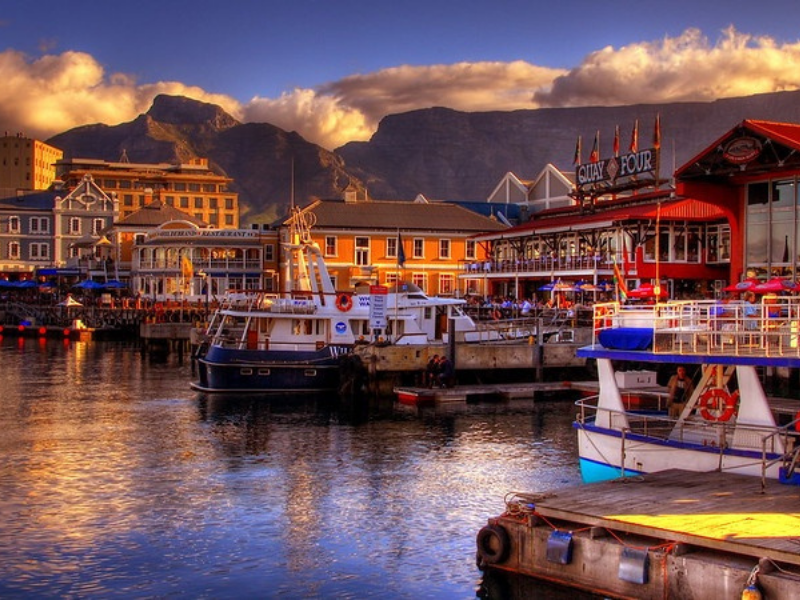 Cape Town is one of my must-visit destinations, not just because of the great entertainment and beautiful people. Antiquity fascinates me, and Cape Town is filled with historic beauty. Just hearing about the contributions of these contemporary hotspots to the city's history is very impressive. Interacting with history by seeing, smelling and even touching these locations and monuments sounds like a promising experience to me.

Cape Town displays beauty in and out of this time, and for some ideas on where to start looking, here are 15 of the must-see tourist attractions in Cape Town:

When you think of mountains, there's a significant level of pointy-ness you visualise, but that's not the case here. Table Mountain has a flat top — hence the name — and that's just one of the reasons it’s such a huge tourist attraction. It’s a five-minute ride to the top via the Table Mountain Aerial Cableway, but you can hike up there instead if that's more your style.

The mixed-use location is perfect for long visits, as there’s  so much to see and do. There's especially a lot of food and retail outlets, but other forms of entertainment can be found here too. The Victoria & Alfred Waterfront has concerts, museums, aquariums and even Ferris wheel rides; there's delicious excitement for every kind of person. Considering my terrible attention span, I’m certain I could spend hours at this one destination.

Cape Point is a promontory, meaning it's elevated land that extends over a large body of water. This position endows the location with incredible beaches, bays and hills with beautiful vegetation. The segue of the individual impressions into each other shows nature at its most wholesome and stunning.

Formerly known as the Malay Quarter, Bo-Kaap has a certain antiquity to its beauty which can be traced to the neighbourhood’s peculiar history. Back in the 1760s, the houses were leased to Cape Malays — people from Malaysia, Indonesia and other parts of Africa who were brought to the cape to work as slaves. When the slaves were finally allowed to buy these houses, they could also make changes to the uniform white colour all the houses were painted. To express this newfound freedom, the owners of the houses painted them the incredible myriad of colours you see now.

Formerly used as a detention and exile site, Robben Island has a lot of history to it, far beyond what we can see today. The island in Table Bay started as a home for wildlife and greenery, before it became a maximum-security prison, and today, a museum. In 1999, it was declared a World Heritage Site by UNESCO. The island sounds a little bit like a time machine to my curious mind.

This garden is such a glorious manifestation of nature, it's recognised as one of the greatest botanical gardens in the world. Kirstenbosch National Botanical Gardens is a part of Table Mountains National Park, as the beautiful greenery is set against the eastern slopes of Table Mountain — the first of Cape Town’s most beautiful tourist attractions on this list. Besides the walks and trails in Kirstenbosch, the tours of the garden also involve a mountain bike transit route and a tree canopy walkway.

What happens when a colony of African penguins show up in 1982 to make a sheltered beach in Cape Town their home? Well, a popular tourist hotspot is born. You can go there to see the endangered species or the many granite boulders on the bay. Boulders Beach Penguin Colony is also a part of Table Mountain National Park.

9. The Heart of Cape Town Museum

The Heart of Cape Town Museum stands as a monument to the first-ever heart transplant in human history. Through a guided tour of the museum, you get to physically appreciate and interact with the work of Professor Christiaan Neethling Barnard and his team. The museum might just be 10 years old, but what it stands for has a great impact on modern medicine.

False Bay is such a large curved coastline, sailors sometimes mistake it for Table Bay. Unsurprisingly, this is how the bay got its name. (Yes, the disappointed sailors had a fit and called the bay a liar.) All that myth surrounding its location probably has something to do with Muizenberg beach remaining a hidden gem for so long. However, the seclusion of the beach doesn't make the surfing community any less alive.

Cape Town Castle is the oldest colonial building in the entire country. The bastion (fort) was built in the 17th century to protect against expected war between Britain and the Netherlands. In 1936, the Castle of Good Hope was declared a historical monument, and today lots of ceremonial activities take place there, including a guided tour of the Castle.

For a more artistic perspective of South Africa’s history, the Iziko Museums of South Africa is your destination. Iziko, an isiXhosa word for ‘hearth’, is made up of 11 national museums, and incredible facilities that document the country’s social history. The heritage institution offers a full experience of South African culture, including food. Squeals.

This mountain lies between two other notable locations in Cape Town, Table Mountain and Signal Hill. Lion’s Head is quite the backdrop, no matter what direction you’re facing. The city’s administration prohibits construction on the higher parts of the hill, and this helps ensure the setting is absolutely natural.

Zeitz MOCAA is located at the Victoria and Alfred Waterfront, the administration of which invested R500-million in the museum’s development. Jochen Zeitz, currently the president, CEO and chairman of the Board of Harley Division, has a vast art collection which he’s loaned to the museum for his lifetime. Hence, he is recognised as a co-founder of the museum, and it bears his name although he isn't really a shareholder.

This toll road is a 9km drive through Chapman’s Peak, a notable mountain in Cape Town. Involving 114 curves, the drive offers an incredible view of the Atlantic Ocean and the other mountains on the west side of the Cape Peninsula. There are a bunch of stops along the way, in case a certain view is too beautiful for you to just drive by.