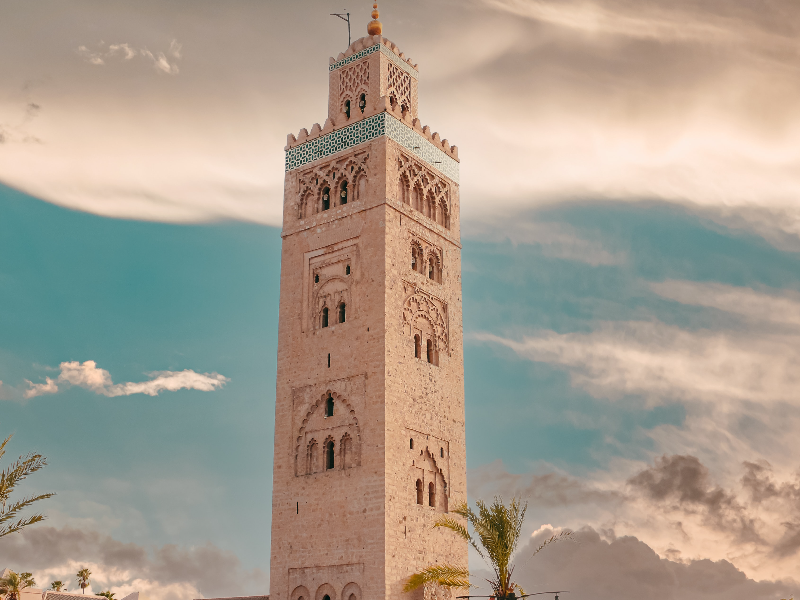 Marrakech is one of the top travel destinations in Northwest Africa. This former imperial city in western Morocco is home to beautiful palaces, majestic gardens, jaw-dropping mosques, vibrant souks and delicious food.

If you are ever in Marrakech, these are 10 places that you can’t afford to miss :

El Badi Palace was built at the end of the sixteenth century by Sultan Ahmed Al-Mansour to commemorate the victory against the Portuguese. Although it’s currently a ruined palace, many people go there today to get a feel of what once was. The Palace is believed to have had 350 rooms, a large pool and several gardens;  It took 25 years to construct. Visit the palace and take in a bit of ancient Morrocan history.

Locals call this the world’s most iconic garden, and they just might be right. It was named after Jacques Majorelle, who bought the land in 1923. Following his death, the garden entered a sorry state and was on the path to extinction, until Yves Saint Lauren bought it in 1980 and restored it to its former glory. It's a large garden with an extensive collection of exotic plants, bright flowers and fountains. There is a colourful villa in the garden that has become a popular place for taking pictures. Don’t miss the Yves Saint Lauren museum nearby.

The souks of Marrakech are one of the largest in Morocco and are known globally as one of the most exotic marketplaces in the world. Tourists can purchase fabrics, food, jewellery, and more traditional Moroccan products in this fascinating market. When in Marrakech, leave your hotel and head to the Souks because it’s an experience you don’t want to miss.

The Saadian Tombs is one of the most popular tourist sites in the city. The tombs date back to the end of the sixteenth century, they are located in a closed garden which visitors can get to through a small passageway. There are over a hundred beautifully decorated tombs in this garden and they are called the Saadian tombs because 60 members of the Saadian dynasty were laid to rest there; they  Saadian ruled morocco in the seventeenth century. This place has such rich history and is definitely worth a visit.

The Koutoubia Mosque is an architectural masterpiece that is as amazing at night as it is during the day. Non-muslims can’t actually enter the mosque which I’m sure isn’t ideal but religion needs to be respected. If you want to see inside the hall, I advise you to visit the mosque on a Friday and take pictures when the doors open for prayers. Feel free to admire the building’s beautiful exterior and take photos whenever.

This is a beautiful ancient gate that leads to the royal part of the city, it was built in the 12th century to impress visitors and it serves this purpose to this day. Bab Agnaou is a top tourist destination in Marrakech as people come from all over to marvel at the architectural work and hence it makes our list today.

Located next to the Koutoubia Mosque, you will find an exciting mix of locals and tourists at Jemaa El-Fnaa square. Here vendors sell anything from food to souvenirs; you will also find numerous entertainers such as fortune tellers, snake charmers, etc. You should be careful here because although most people are doing legitimate business, there are also a couple of con-men. But generally, Jemaa El-Fnaa is a beautiful experience anybody in Marrakech should have.

Unlike El-Badi Palace which was mentioned earlier, the Bahia Palace has been well preserved through the years. The palace was built in the 19th century and is a great way to travel back in history; experience life in over 150 rooms and an impressive two-acre garden, constructed in traditional Moroccan and Islamic style. The outside court of the palace is a popular Instagram spot, so be picture-ready when visiting.

Although it is now a historical site, the Medersa Ben Youseff was once the biggest Islamic college in Morroco. The architectural masterpiece is one of the finest examples of Saadian era artistry in morocco; at its peak, it was home to over 900 students and was the largest centre of Quranic study in the country. These days, people visit Medersa Ben Youseff to admire the stalactite ceilings, cedar-wood detailing and Kufic inscriptions used to decorate the courtyard. It’s a magnificent structure that drops the jaw of most visitors.

One thing that we can’t hide about Marrakech is that it’s usually hot, the best way to beat the heat is to go to Oasiria, the most exciting water park in Northern Africa. Oasiria has the largest wave pool on the continent, exciting water slides, a lazy river and so much more. It’s the perfect family getaway for a fun, refreshing time.